Tomorrow is Halloween, which is exciting enough (we are big fans—pumpkins and caramel apples were carefully selected at Homestead Farm weeks ago, Hocus Pocus has been the movie night feature three times…so far), but today is an important day, too. Today, The Countdown begins.

Right now, it’s four weeks exactly until Thanksgiving. And even amid Halloween preparations, we’re starting to get ready. As soon as the leaves start to turn, we can’t help ourselves. 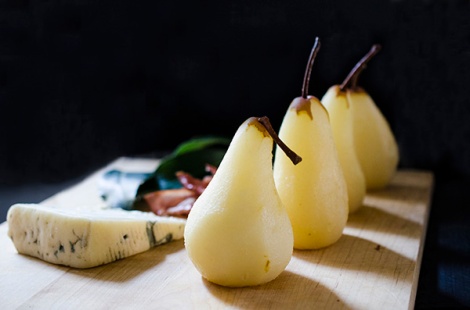 When we began talking about the upcoming weeks’ postings, we knew we wanted to keep Thanksgiving in mind for each, sharing recipes that are delicious all on their own, but that also make wonderful contributions to the Thanksgiving dinner jigsaw puzzle… because it really is a jigsaw puzzle.

Appetizers are important, but they can’t be too heavy—dinner itself is, after all, the main event, and you don’t want to fill up on snacks, no matter how great they may be. Side dishes have to be complimentary to each other and to the turkey, but if you’re hosting a big group, as we usually do, you also need something for everyone. Then there’s dessert, which, no matter how full we get during dinner, is still probably our favorite part of the day. And to top it all off, no matter how many new dishes you want to introduce to the table, you can’t forget about traditions—and sometimes, there’s just not enough room for both. Planning and making lists of dishes, ingredients, shopping/prep/cooking schedules are key. As far as food goes for us, Thanksgiving is THE meal of the year. We’ve been waiting for this moment since we put the last dish away from 2013’s meal, so you can imagine the conversations that happen around Thanksgiving planning.

Actually, they’re a lot like the conversations that happen around any meal or Lee & Lou post… only there are more of them and the phrase, “Are you crazy?” inevitably gets said with more frequency and fervor. (“Maybe we don’t make pecan pie this year…” “ARE YOU CRAZY?!” Lots of emotions.)

You might think that we sit around, leisurely discussing upcoming recipes and meals at the kitchen counter or dining table, and sometimes, we do exactly that. But more often than not, the initial, vague ideas—something with quince? a light fall dessert? I ate roasted radishes the other day—are bounced back and forth in half-sentences dangling from sleepy couch-conversations, long after Seth Meyers has finished his opening monologue. There’s usually a lot of tea involved and, if we’re not together, phones squished between couch cushions and cheeks. At some point, something too ridiculous gets said or the conversation requires too much thought to sustain, and one of us will say, “Uh, it’s almost two. My brain has stopped working. Can we talk about this tomorrow?” And the next night, we’ll pick it up where we left off.

So, now we have for your reading and eating pleasure, a recipe courtesy of one of these late night ramblings: Poached Pears with Crispy Prosciutto and Creamy Gorgonzola, a perfect prologue to your Thanksgiving dinner. It’s not too heavy, which means you won’t fill up before you get to the dinner table, but it still feels special and indulgent enough to serve on a holiday table. Plus, it has four other Thanksgiving bonus points going for it:

1. The recipe is about as simple as it gets: This means you can worry about other things, like trying to figure out the secret to your aunt’s famous stuffing.

2. It won’t take up much kitchen real estate on Thanksgiving day: Stove space is precious on Thanksgiving, and since you can poach the pears in this recipe the day before, that’s one less burner you have to worry about time-sharing during day-of prep.

3. It’s flexible: It’s easy to swap one or two ingredients to make this recipe suit you and your guests. You can substitute goat cheese if you don’t like blue, and use walnuts instead of the prosciutto if you don’t want the meat.

4. It’s versatile: Though we’ll be using this dish as an appetizer, it also makes a great addition to a brunch table. (We love recipes like this.)

Notes: We used Bosc pears because they hold their shape best when poached. If you’re poaching a day in advance, cover the pears when cool and refrigerate. Bring them to room temperature before serving. You can easily double or triple this recipe.

* Add lemon juice and about 6 cups of water to a saucepan large enough to hold the pears.

* Peel the pears and cut a slice off the bottom so they will stand upright without wobbling. As they’re peeled, add them to the lemon water.

* Add the bay leave(s), sugar and, if you need to, more water to cover the pears.

* Bring everything to a gentle simmer. Cover and poach for about 10–15 minutes, depending on the size of the fruit and whether or not your pears were stored in the fridge.

* As soon as you can easily insert a thin knife into the bottom, carefully remove the pears to a colander. Discard the bay leaf.

* Crisp the prosciutto in a frying pan until brown (no oil needed) and set aside. If your’e going vegetarian, toast the walnuts instead.

* To serve, place a pear on each of four plates and divide the Gorgonzola and prosciutto/walnuts among them. 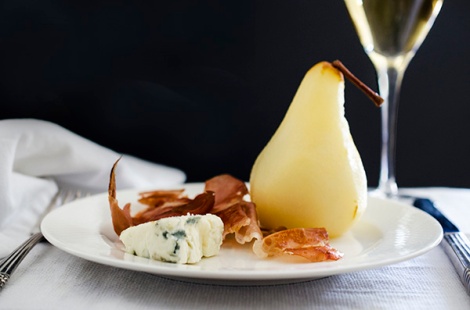 Looking for something else? Poke around!

8 responses to “Poached Pears with Crispy Prosciutto and Creamy Gorgonzola”

Just What You’re Looking For: